Hemp vs. Marijuana: Are Hemp and Marijuana the Same? 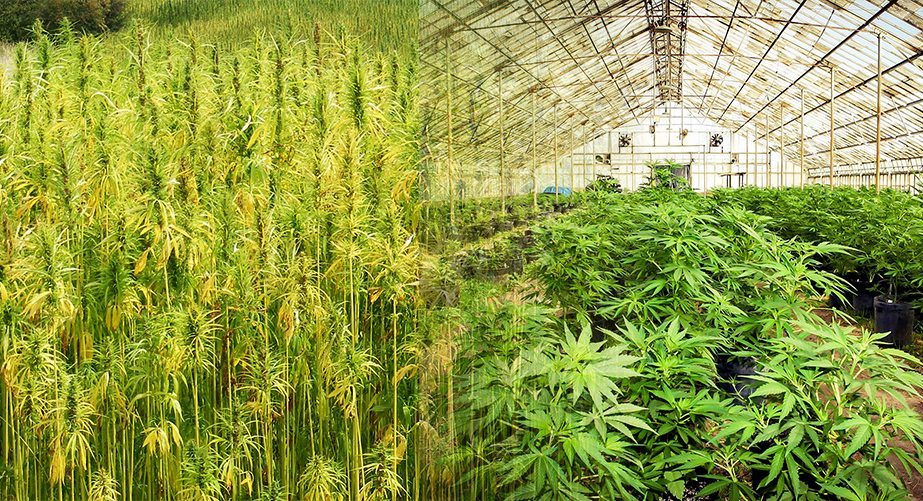 The answer is No. These are just both part of the Cannabis family, nothing else.

The functions, cultivation, and applications of both Hemp and Marijuana are completely different. But most of the people are unable to find these differences and confused. If we went to the past in 1970’s the society accidentally grouping all Cannabis species as a scheduled drug and banned under the control substances act CSA.

But now the legislation is being made. Hemp and Marijuana serve completely for different purposes.

As is widely known is used for medicinal or recreational purposes.

We can differentiate by its appearance, makeup, and natural adaptabilities. There are noticeable differences between these two.

In general, when we compare both plants, a marijuana farm with those of industrial hemp, they are very different from one another.

The main difference between the two is in its chemical composition, specifically in tetrahydro cannabin (THC).

The environment in which hemp and marijuana grew is strikingly different. Some medical cannabis also cannot be grown too close to each other. These have typically grown 6 feet apart.

What are the chemicals that make hemp and marijuana different?

Tetrahydrocannabinol (THC) is responsible for marijuana’s psychological effects. An average batch of marijuana contains almost 5% to 20% of THC. Some premium marijuana can have the value up to 25% to 30%.

The THC levels in hemp are only 0.3%, making it impossible to feel “high.” The High CBD contents in hemp take over to the THC also. So the CBD contents can make the minimal amount of THC present useless.

The benefits of CBD found as an analgesic, anti-inflammatory, and anti-anxiety. There are no psychoactive effects on health. These qualities are making it popular as a medical supplement.

When Hemp got grouped with Marijuana

In the 1970’s the USA declared war on drugs and signed into the law of controlled substances. There is a lot of banned drugs list, and they created a department of DEA (Drug Enforcement Administration). They unintentionally outlawed the hemp oldest domesticated crop. This act created a misconception about the plant.
The debate of hemp vs. marijuana-fueled by the confusion and misinformation that surround the cannabis plant.

We will dispel several myths and shed light on the differences between industrial hemp and marijuana. To help us answer the question, we will in need to peek into botany, genetics, linguistics, and even law.

For your information, the industrial hemp and marijuana came from the same genus flowering plant named cannabis. Genus refers to a subfamily of plants, not as a single species. It means there are multiple types of the plant. If we talk about the scientific classification, multiple species can exist within a single genus with different properties.

The genera of cannabis include three different species;

Cannabis sativa is the most common strain of cannabis. It has been cultivated throughout history for some purposes, including the production of seed oil, food, hemp fiber (to make cloths), medicine, and even recreation.

This species of cannabis discovered in Russia that flowers earlier and can withstand harsher conditions than Cannabis Sativa and Cannabis Indica. It is the hardiest of the three, but it is relatively has a lower THC content than other types.

If we talk about the THC levels in these three types then the Ruderalis typically has the lowest levels, Sativa has a higher level of THC than it has CBD, and the Indica has a higher level of CBD than it has THC. The men have been cultivating the cannabis for thousands of years; the effects of artificial selection have to lead to several different types of cannabis even within the same species. It all depends on the need and purpose of cannabis cultivation.

Marijuana not used as the industrial plant, on the other hand, cannabis sativa have been artificially selected and bred to grow taller and sturdier. By these properties, we can get hemp oil, wax, resin, animal feed, fuel, and fiber to made clothes, rope, and many more industrial usages.

Medical marijuana is produced mainly from variants of Cannabis sativa that have been selectively bred to maximize their concentration in cannabinoids. Cannabis Ruderalis is almost exclusively grown for medicinal purposes, as it naturally has very small quantities of THC.

So what’s the Difference?

The major and arguably the only difference between these is that industrial hemp exclusively made from Cannabis Sativa that was specifically bred to produce the lowest concentrations of THC possible.

Hemp producing cannabis has tall, fibrous stalks that are very strong and have very few flowering buds. On the other hand, marijuana strains are short, bushy, and have high amounts of THC. Industrial hemp and medical marijuana are so distinctively different than most laypeople wouldn’t be able to tell that they belong to the same genus of plants if they encountered them in the wild. While marijuana bred with the only purpose of maximizing its THC concentration, industrial hemp always has trace amounts of THC and naturally occurring high amounts of CBD.

It means that industrial hemp’s chemical profile makes it incapable of inducing intoxicating effects and getting you “high.”

Many people today are turning to industrial hemp products as an alternative to medical marijuana because of industrial hemp is naturally rich in CBD and has been bred to have only trace amounts of THC.

When we talk about the cannabis the first image in most people came to burning joint or bong filling up with white smoke. But you are not aware of the other usages like plant-based plastic, durable quality paper, and fabric of high quality grades.

Benefits of cultivating the Hemp

Hemp can yield 3 to 8 dry tones of fiber per acre. That’s four times what an average forest can yield. Hemp cultivation has not required any chemicals, pesticides or herbicides.

The whole plant is useful we can divide the parts into four categories.

• The remedy for conditions such as arthritis, joint pain, fibromyalgia, and eczema.

Benefits of Hemp on health

• Helps to prevent anemia and headaches

• Helps to cure diarrhea and constipation

One of the advantages of cannabinoid-based medicines would be that they target specific tumor cells. They don’t have any toxic effect on normal nontumor cells. It’s an advantage concerning standard chemotherapy that targets everything.
Marijuana is not able to cure any of these known diseases in human.

Health Benefits of CBD from Hemp

Marijuana has not any nutritional value as compared to the hemp seed.

Although the hemp seeds that are cultivated specifically for oral consumption are devoid of THC, which is a psychotropic chemical found naturally in some varieties of hemp.

They could have come in contact with THC-covered plants and the residue can induce a feeling of being “high.” While this effect can be uncomfortable if unanticipated, it is quite rare, non-threatening, and does not last long.

Doctors and nutritionists also caution people who are sensitive to dietary changes against consuming hemp seeds in large quantities, as they can face mild diarrhea. Additionally, those who are on anticoagulant drugs need to be especially cautious when consuming hemp seeds as they inhibit platelets and may pose a risk of bleeding.

Marijuana is UNSAFE when taken during pregnancy. Marijuana passes through the placenta and can slow the growth of the fetus.

Marijuana can weaken the immune system, which might make it more difficult for the body to fight infections.

Long-term use of marijuana can make lung problems worse.